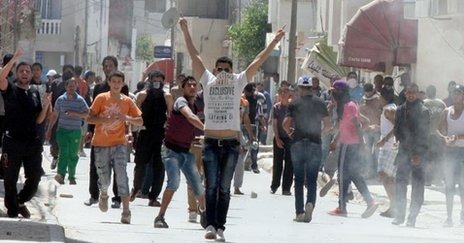 Last time I wrote about Tunisia things were not going exactly well. And this hasn’t pretty much changed. Weeks ago, an assassination shook the country once again, and Tunisians are more than ever aware of their transition being in a complete stalemate, while they carefully look at their neighbor out of the corner of their eyes. Despite what TIME Magazine may say, Egypt has always been and will for years remain immensely relevant. This time, the political crisis was triggered by the 25 July assassination of MP Mohamed Brahmi, attributed to a jihadist movement. The kind of an extremist group that has more than once put the country on the verge of deeper social instability, while the authorities seem unable to (or unwilling to) impose themselves and efficiently tackling the issue. Not surprisingly, the previous Government fell after the murder of the remarkable opposition leader Chokri Belaïd in February.For weeks, thousands of people have been taking to the streets. Their main demands target both a Constituent Assembly that is taking too long to fulfill its task (whose work has already been suspended) and an Islamist-led Government controlled (in coalition with minority parties) by the so-called moderates of Ennahda (a sort of Muslim Brotherhood, although many differences between both groups abound). I already explained how a Tamarrud movement had previously emerged, an initiative that has as of lately gained momentum and was even at the root of the launching of a”week of departure”. In addition to that, and also suspiciously similar to Egypt’s path, a National Salvation Front has been created, gathering diverse actors from the extreme left to the center-right. Even though President of Ennahda Rached Ghannouchi was swift to initiate consultations with a key stakeholder in the country, the largest trade union federation, UGTT (General Union of Tunisian Workers), opposition parties have so far rejected the establishment of a transitional government. They do not believe this kind of vehicle should be headed by the Islamists, who have shown increasingly divisive and, above all, have not fulfilled almost any of their initial promises, notably the one regarding the drafting of the Constitution in less than one year. A very delicate economic situation is also at stake, as it cannot be forgotten that the 2011 Revolution was kindled by a poor merchant who set himself on fire out of misery and desperation. And presentable growth digits are still to be found.
Read More:

Jun 27, 2022
Slogans such as “the people want the fall of the regime” have been heard anew across several Tunisian cities. In spite of this, Ghannouchi and his allies cling to the legitimacy card: “in democratic regimes, protests don’t change governments”. Protests may not be the only means by which a Government may be overhauled, but massive demonstrations do stress an acute problem nearly all the countries in the region are facing: mounting polarization. A polarization that up to a certain extent comes hand in hand with democracy and the granting of freedoms, thus a consequence of the “Arab Spring”, but at the same time a polarization that stretched to its maximum and not approached with enough care may lead to deep social conflict and serious bouts of violence. A polarization that has certainly been encouraged by the Islamists’ authoritarian unaccountable attitude. Nonetheless, the opposition and unions have also been playing a very dangerous game in Tunisia, merely criticizing the government in place without really offering a sensible proposal to overturn the situation. Their only aim seems to be demonizing the Islamists, blaming them for each and every problem the country has faced and currently faces. Words such as “terrorism” have already been muttered. Again, the example of Egypt looms large, and no one seems to realize how critical the crisis may turn to be.Could the establishment of a national unity, or “salvation government” of technocrats that would govern by decree the opposition (paradoxically spearheaded by former head of government and secretary-general of Ennahda Hamadi Jebali) has suggested be a solution to insecurity, economic instability, social cleavages and legislative stalemate? It certainly might be an option, but the national interest this body will have to respect above everything should be carefully defined by all stakeholders with no exception. First, both the current government, the opposition, the entrepreneurs, the remnants of the old regime… will have to accept their responsibility in what has been done up until now. The Tunisian people should be transparently informed of all this: no more deals behind their backs. And each and every citizen should reject propaganda and try to assess what they are told with common sense and a critical approach. If their political representatives really work to defend the situation, their well-being should remain the only way to unity and national reconciliation. In this sense, Tunisia has at least two things in its favor: on the one hand, the lesser role the army and the security apparatus have played during the last decades and, on the other hand, the willingness to reach a true peaceful solution most of the leaders are showing (or at least pretend to).

Few days after Egypt’s “bloody Wednesday” and with the words “civil war” hinging on everyone’s minds, Tunisian leaders felt an intense pressure to alleviate the tension, both exerted from inside and from outside the country. A meeting was held in Paris between Ghannouchi and former Prime Minister Beji Caid Essebsi. An agreement seems to have been reached, whereby the President will be replaced by the latter and a technocratic government will be formed. One shocking new feature of this government is that two posts of deputy prime minister will be created and given to opposition representatives: one for security affairs and one for economic affairs. This should guarantee checks and balances and maybe a fairer and more transparent electoral campaign. They say you should keep your friend close and your enemies closer, don’t they?