Discovering MENA: Notes On The So Called “Turkish Spring” 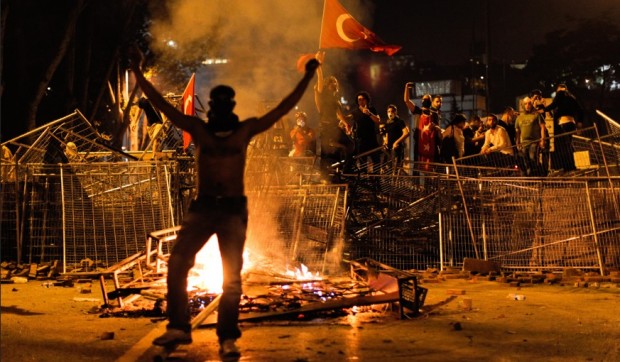 All the media, specially all the social media, is abuzz with the demonstrations taking place in what is for me, one of the most enigmatic countries in the world: divided between Europe and Asia, but part of the Middle East without being Arab, a Muslim country which is deeply influenced by a strong secular pillar, a country that still remembers with nostalgia its past as one of the biggest empires and seems to be trying to recover that status by means of what many call the “Turkish model”…

A country in the midst of a turmoil-ridden region which has managed to thrive despite of its entourage, whose population seemed content with an increasingly authoritarian country, which has scorned the Europeans during the last years (Europeans that in turn have been sidelining their accession file for years while allowing for the inclusion of more questionable choices), while approaching a more disposed Arab world.
The “Taksim Square protests” that have been taking place throughout the last weeks, and that are setting themselves as a new hope for youths all over the world, are so far the largest directed against the Islamic government since it was raised to power in 2002, started as demonstrations against an urban development project in Istanbul. Environmental groups, residents and unions denounced the destruction of Gezi Park, a park the municipality planned to destroy and turn into old Ottoman barracks decorated with a mall.
This opaque operation was conducted without consultation, like many Pharaonic urban projects launched in recent months by the government (the fact that Erdogan was major of the city for almost twenty years may have something to do with it): a giant airport, a channel on the Bosphorus, a third bridge across the Straits, a gigantic mosque on the hill of Camlica…

The Square was closed by authorities on safety grounds on 1 May, but people went back to the streets and this time, it was not only about architecture, it was about much more. The newly-kindled protests gathered angry Turks in their tens of thousands and did not circumscribe to Taksim and its surroundings. Not even to Istanbul, as they spread to Ankara and Izmir. Besides, demonstrators aimed higher: the main target of their wrath was the Turkish government, mainly its controversial Primer Minister, Recep Tayyip Erdogan.

These years, Erdogan (his government also, although to a lesser extent) has been increasingly accused of growing authoritarianism, as well as of adopting too self-oriented and paternalistic an approach to national politics. The state’s poor record on human rights has been denounced for years by watchdogs such as Human Rights Watch and Amnesty International. The treatment journalists receive is especially appalling.

The invasion of the public sphere by religion is also widely criticized by many amongst Turkey’s population, be they religious or not. Let’s not forget the country, actually created in 1923, was shaped from the beginning by the secular Revolution lead by Ataturk. Erdogan stands out as a moot figure: incredibly popular in the more conservative regions thanks to its religious stance, he’s clearly no cup of tea for the young urban educated classes in Istanbul and Ankara. One recent decision did nothing but fanning tensions: a bill restricting alcohol sales, ads and consumption, justified by no rational ground other than drunk driving, although many believe it was one step forward towards the progressive shaping of a XXIst century-religious state, in the same line as the ban on “public kissing” for couples on the subway issued in Ankara.

Indeed, the protesters were predominantly young and presented different origins, although the lion’s share of them label themselves as nationalist secularists (their leader par excellence’s effigy has been seen in several flags waving across sit-ins and demonstrations), socialists, Alevis and/or Kurds. They were the first to be there, they were acting out of resentment and outrage that had been building up for years. At first, they were not joined by the “established opposition” (besides the Republican People’s Party), but instead were supported by three of Istanbul’s main football clubs.

Their number grew thanks to the use of social media (many protesters have complained about the lack of sufficient coverage by the Turkish media, apparently more worried by the election of Miss Turkey), the hashtags #OccupyTaksim  or #OccupyGeziPark became viral mainly on Facebook and Twitter, where fellow youths who felt the same way decided to take to the streets and voice their demands. They were confronted by the Security Forces, who have been widely accused of excessive use of force beyond resorting to water cannons and tear gas, clashes broke out and mass-arrests were carried out.

Adding to that, plainclothes thugs claiming to be municipal police burnt down the tents in the park. Human rights organizations denounced the violent repression, citing more than a thousand injured, and Amnesty International has even mentioned the death of two people. Their feelings were also shared by their brethren in neighboring countries, those who went through similar processes two years ago. Up to a certain extent, people were not wrong when they insinuated they felt they were living a “Turkish Spring”.

Nonetheless, these demonstrations are not tantamount to those that took place in Egypt, Tunisia and the likes. Mainly because, despite all its drawbacks and pitfalls, Turkey remains, in essence, a democracy. Erdogan was freely elected by his people. He was in fact elected twice. Even if it’s nowadays hard to believe, Turkey is a much more open country than it was two or three decades ago.

Turkey stands as the “good pupil” of the liberalization measures that have been put into place during the last decade across many countries in the former “Third World”, particularly in neighboring countries such as Egypt and Morocco. Economic liberalization that leads to a remarkable economic boom, but also politic liberalization that has little by little helped the country to escape from a strict military rule, the Ergenekon trials representing a key turning point in this respect. The question remains… at what price?

So far, Erdogan has chosen to remain defiant, downplaying in more than one occasion the significance and size of the protests, although both he and several officials have admitted there has been wrongdoing by the police. It seems the project of Taksim and others will go on as planned, though. Many have felt a glimpse of hope with the suspension of the project by a court and the decision to withdraw all Police officers from the site of the protests. In addition, the country’s unions have pushed for a general strike on 5 June which could further put under threat the government’s position.

Symbolically, the more moderate President Abdullah Gul has called on those in power to “pay attention to different ideas and concerns”. Erdogan himself is looking forward to becoming President in 2014. But more and more amongst his fellow countrymen believe enough is enough. Why would they elect someone that criticizes Arab dictators but is turning into the same thing? So much for a Turkish model.

Funny note: on Sunday, Syria recommended its citizens to avoid travel to Turkey “because of the deteriorating security situation in some Turkish cities”.