We Asked Egyptian Smokers Why They Started Rolling Cigarettes, and Here Is What They Said

With Egypt’s economy facing turbulent times, it is no surprise that people started thinking twice about their tobacco choices. The true heroes are the smokers who have managed to quit this extremely unhealthy and body damaging habit. However, not everyone could give up the habit, even in the face of the floating Egyptian pound, and their damaged lungs.

For the past few years, we’ve been noticing an increase in the number of smokers who choose to roll their own cigarettes and those who prefer using vapes from somewhere like Slickvapes instead of buying the traditional cigarette. After trying a vape, you may want to use something different to smoke through. If this is the case, maybe you should have a look at a water pipe too see if you’d be interested in this product. While we weren’t used to seeing a co-worker rolling what appeared to be a hash joint in the middle of a meeting, we are now quite aware that this is just another regular cigarette. It looks exhausting and a time waste, it feels like a hassle so we decided to ask 10 smokers what it is with this new rising Cairene trend.

Heavy smokers agreed that by shifting to roll-ups, they automatically came to smoke less. Whether you’re stuck at work with a client, driving your car, you are at a crowded party or your just lazy, you won’t always have the luxury of finding a place to start rolling. Some smokers told us that they almost cut to half their regular daily tobacco intake. While the toxic effects remain the same, they thought 10 cigarettes a day instead of 20 might be the beginning of quitting altogether.

From Local To Global: Bringing You Skincare Brands Catered To Arabs 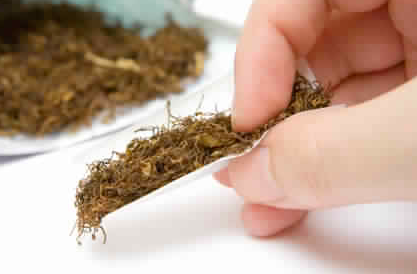 Heavy smokers agreed that they can consume up to one pack a day. Good quality brand name cigarettes currently cost around EGP 30. On the other hand, a 50 gram pouch of good quality loose tobacco costs around EGP 80. Most smokers agreed that loose tobacco lasts around 5-7 days longer, which is a pretty good deal considering the soaring prices in Egypt.

Roll-on cigarettes offer a better and more enjoyable flavor, in comparison to pre-filled smokes that are heavy with artificial fillers. A tobacco pouch offers you a pure taste, as it basically consists of the same material that people have been smoking for hundreds of years. One smoker told us that ready made cigarette packs lack the proper sealing that a customized cigarette offers.

A common belief that it is a healthier choice

Almost all smokers claimed that roll-on cigarettes are a healthier alternative, due to the lack of artificial chemicals, and the decreased number of possible daily smokes. However, no research supports this claim. Detrimental effects of smoking, like heart disease, cancer, asthma and strokes remain the same for both types of smokers. A Norwegian study of 26,000 smokers even showed that roll-ups were associated with higher, not lower, risks of lung cancer.

WE SAID THIS: Factory made or roll-ups, there is no better option than quitting this lethal addiction altogether.