Meet Rahaf Khatib, the First Hijabi to Appear on the Cover of a Fitness Magazine

A mother, a passionate runner, a marathoner, and a Muslim Syrian born/American woman, Rahaf Khatib, was one of the first hijabis to appear on the cover of an international magazine “Women’s Running”. She is one of the strongest influencers on Instagram, when it comes to issues of health.

Khatib is a true role model and an inspiration for all women. This is exactly why her story is worth reading, and why I have decided to tell it. 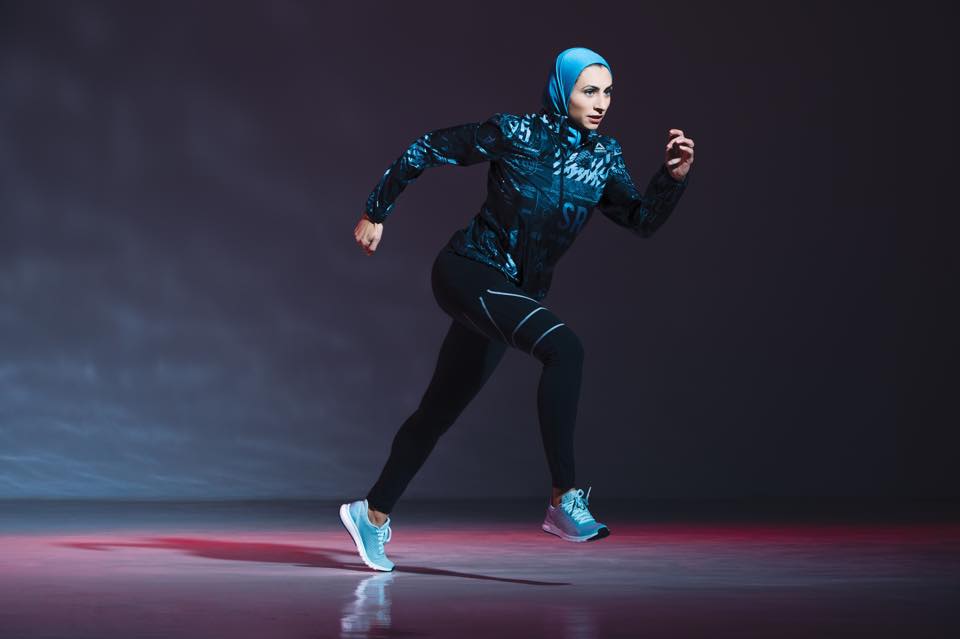 As a runner, Khatib trains 6 days a week, and runs 3-5 days a week. She also conducts strength training exercises 3 times per week, and practices yoga on her rest days.

“With running, you need to incorporate strength training to prevent injury and to help the body get strong, in order for it to withstand all that pounding on the pavement. Yoga is equally important for running, for balance, and for mobility, ” Rahaf says.

Rahaf was a young wife and a mom who was trying to find meaning and purpose for her life, before all this training and running began. She did not want to get drained by merely staying at home, so she thought about doing something to increase her self-confidence, her stamina, and her spirituality.

“Going to gym didn’t fulfill all these desires I had. And then I ran my first race, a 10k, back in April of 2012, and everything changed. I got addicted to the feeling of crossing that finish line, as well as that thrilling sense of achievement that accompanied it,” Rahaf elaborates. 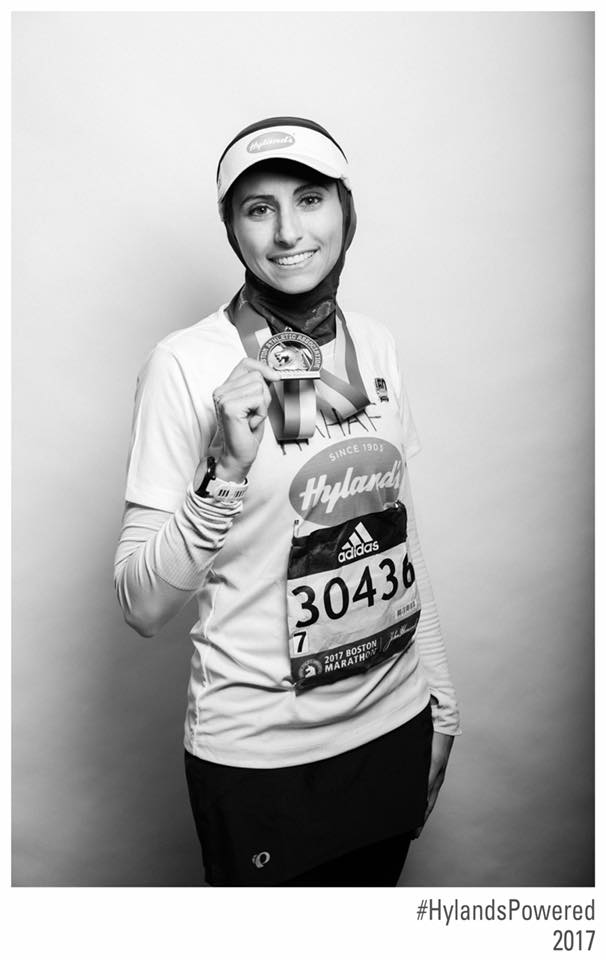 “I don’t do this for looks. I do this for representation, since marathoning is predominantly a ‘white’ sport. You rarely see hijabi marathoners.” she said, while trying to point out that there are other hijabi runners, but they don’t run marathons as much.

Her family and the look of pride and happiness on her kids’ faces, during training and after a marathon, is her main inspiration. Although she is a mother, she still finds time to train for marathons. She trains when her kids are at school and on the weekend. Rahaf’s husband has joined her in running marathons, and has completed four marathons himself. “We enjoy training together and it gives us something to bond over, ” she said.

Rahaf also told us the whole story behind how she got the magazine cover. The magazine reached out and asked her to email them her story and how she started running.

“I was a Runners World top ten finalist for their 2015 cover search contest. And was featured briefly in a Nike ad,” she said.

After emailing them her story, they asked her if she would like to be in a feature in their magazine as 20 kickass women who changed the game of running, not just that, but to be on their cover in October 2016. As a moment of pride for her and all hijabi runners for being fairly represented in media as other runners, she cried out of happiness. 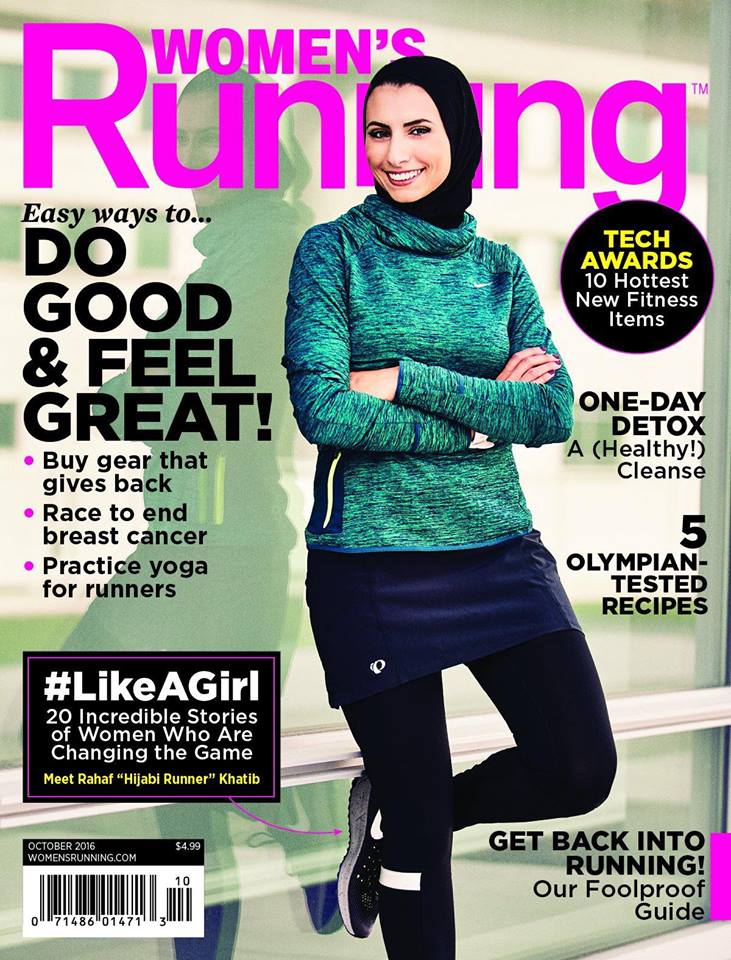 To keep herself going, Rahaf takes a step back every now and then; she does this so as to appreciate how far she has come and how hard she has been training. When it comes to finding the right outfit, she tries to find outfits that are suitable for working out and that are modest at the same time. Over the past three years, Rahaf ran 7 full marathons, 14 half marathons, and 2 spring triathlons. 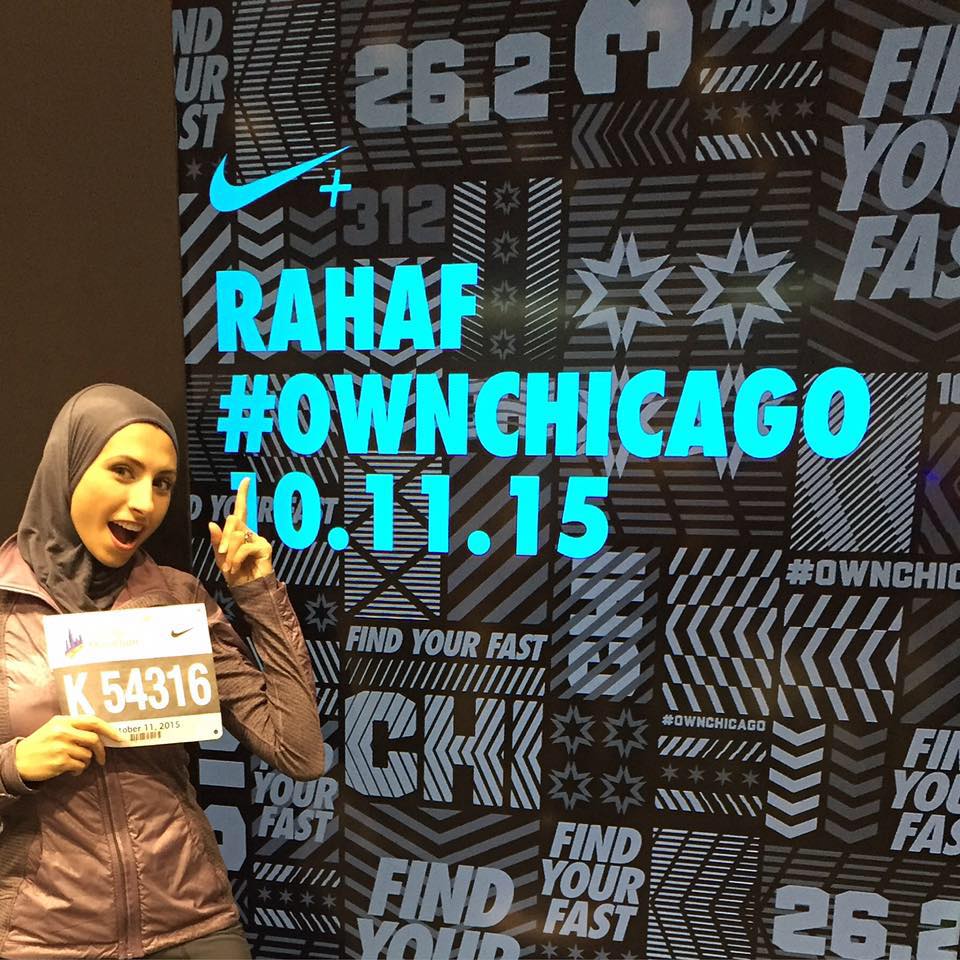 Her goal is to run in all the 6 major marathons. She has already run three of them, and in November she is expected to run the New York marathon. Rahaf also raised $16,000 for Syrian refugees in Michigan, USA, while she was training for the Boston Marathon this past April.

Rahaf documents everything, from the very beginning till now on her Instagram, and she also has a blog where she writes to inspire other hijabi women, and women of other faiths.

WE SAID THIS: You go girl!